Halls Chapel Road runs between Georgia Highway 225 to U.S. Highway 411. At one time, the communities on both ends of that road were designated as Cohutta Springs. Cohutta Springs (west) has been described in another post. It was designated on the map as a post office.

Cohutta Springs itself is on the eastern end of Halls Chapel Road. It was designated as a town or community on the old Murray County map, near an old post office called Loughridge. It was probably north of today's intersection of Loughridge Road and Highway 411. After Loughridge post office closed, the old Cohutta Springs post office (which had also closed) reopened here. It is long gone. Neither of those places is a town anymore, and the area is generally known now by the community name of Fairy. Fairy Valley Church sits at the southern end of Halls Chapel Road, at its intersection with U.S. Highway 411. This area is between the old post office (at Colvard's south of Cisco), and Cohutta Springs Conference Center near the old mineral Springs. That area is now served by Crandall, Georgia's, postal delivery. This map shows Cohutta Springs (as a community or town): 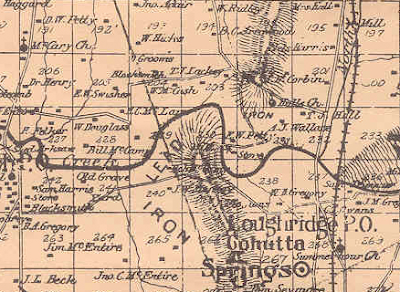 This may have been considered town center of Cohutta Springs, or it may have simply been the location of the second post office. It is closer to the little town (also long gone) that grew up around the mineral springs, which is just east of this area, at the on what is now Cohutta Springs Road.
Posted by Southern Muse at 9:38 PM